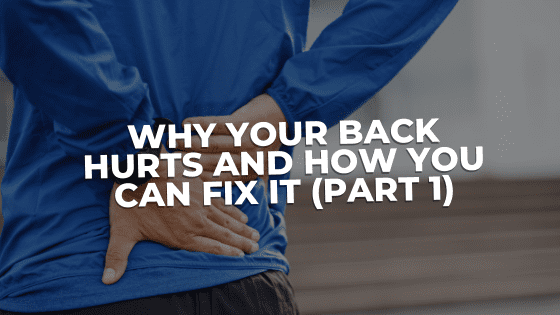 Lower back issues are one of the most common injuries amongst the general population who undertake physical exercise programs.

Most of us have had a “twinge”, a “pull”, a “spasm” or a full-blown “ah fuc* my back” moment and if you have, you know it’s not fun and it’s actually quite scary.

We all know how important our backs are and the extreme consequences of injuring them, so it’s no surprise that we become hyper-aware of our spine and vigilant when things don’t feel right.

The only problem with this fear-driven and hyper-awareness is that we often neglect our backs entirely because we aren’t confident enough to know whether what we’re doing will be good or bad for it, so it’s just best not to touch it in the first place.

It’s like if you had to defuse a bomb. Was it the red wire or the green wire? Ah, screw it, the stakes are too high so I’ll just let that sit there and hope nothing goes wrong.

Except, much like a bomb, if our backs are left alone for too long, they also become unpredictable and unstable due to a lack of strength and muscular endurance (especially in the extension phase).

We, as modern-day humans spend so much time in a flexed-spine position (think rounded shoulders and bum tucked under) that our bodies mould to this shape and preserve energy by resorting to this position at times of rest.
The downside of this is that the muscles on the back of your body (posterior chain) become weak and unprepared for physical activity because they have been dormant for so long.

Then, we get up at 5:30 in the morning and ask our bodies to pick things up repeatedly & quickly (deadlifts, squats, dead balls, anything that requires hinging) and hope that our backs will just miraculously be able to withstand the intensity and volume, despite being asleep since the same time yesterday and despite potentially being overworked in such a short space of time and now slightly fatigued.

And to be fair most times your body will pull its shit together and get you through the session because your body is jacked up, firing on all cylinders and everything is switched on. It’s not until you get home and your posterior chain has been overworked and wants to rest so it can repair itself, but you’ve got a toddler or packet of twisties to pick up off the floor and BINGO, your Erector Spinae muscles are grabbing some zzz’s and your L4 and L5 discs don’t want a bar of it and decide it would be a good idea to let you know about it in the form of some excruciating pain.

Your back has two layers of protection before it gets down the discs.

So when your Erectors give up, and then your QL needs to take over, generally it will tell you that you’ve asked too much of it and start screaming first.

When it does, it is generally quite uncomfortable and feels like a spasm. This is generally what most people feel when they have “done their back” and assume the worst. (fair enough too, because it bloody hurts).

Then, if you’ve done yourself a real mischief and decided to absolutely ignore all the warning signs and push on in the name of fitness and physique (either with absolute weight or with total repetitions) you can slowly start to shift the discs towards the posterior side of your body known as “protruding discs”. This takes a while to occur, but when the straw decides to break the metaphorical camel’s back (yours) you will be in for a nasty one.

How do we avoid this from happening and what do you do if it does happen?

PS: did you like this blog? Share it or forward it to a friend that needs to hear it.

Get our top weekly tips and updates

You’ll be surprised how easy, effective and sustainable this process is
PrevPreviousHow to get better sleep
NextWhy your back hurts and how you can fix it (Part 2)Next