Well, the holiday season has come and gone, and hopefully, everyone is keeping on track with their goals for 2022 (fitness and otherwise). If you have fallen off track and are in need of some inspiration to get back on the horse, then we have got you covered… just have a read about our January Member of the Month here at Waterloo!

We’ve kicked off the first official 2022 superstar with a well-deserving quiet achiever, Phoebe Oakley! Don’t let her calm nature fool you though, she’s been working hard on her fitness at Body By Brando for a whopping 5 years now.

If that alone doesn’t speak volumes for the commitment she has made to herself and the BBB philosophy, then the shift in her mentality from someone who was nervous, intimidated, and overwhelmed by the high standards of our gym, into one of the toughest, strongest and undoubtedly the most bendy athlete’s in our gym, will!

We often hear from people who are thinking about joining that they look at our members and feel intimidated by their physique or performance. Phoebe was no different once upon a time; ‘to be honest, I was also most nervous about my body. The photos of people at the gym look incredibly fit and toned. But rather than being intimidated, it became an inspiration and a good goal to work towards.’

Let’s learn a little more about this BBB pioneer – ‘I am a Learning Support, English, and Psychology Teacher at a girls’ school in North Sydney. I grew up in the Northern Beaches and I currently live in Newtown with my partner. I enjoy being so close to great pubs, bars, and restaurants.’ Phoebe proves that it really is possible to have it all, managing a wide array of hobbies, training up to 5 days a week, a full-time job, and social life.

How does she do it, you ask? Well, her situation (like many of our members) is made much easier by the awesome community and world-class coaching, movement standards, and programming we’ve built here at Body By Brando. Having a group of like-minded, successful, and hardworking people around you really does push you harder and inspire you to be the best version of yourself.

As the saying goes, you are the sum of the 5 people you spend the most time with, and considering most of our athletes spend an hour a day, 5 or 6 days a week at our gym then rest assured you’re in safe hands and well on your way to becoming the best version of yourself just by rocking up to the gym.

Before coming to us, Phoebe had tried it all – functional training gyms, online programs, self-directed training’ but found that ‘one thing missing from some of the gyms was a great community. It was easy to walk in and out of a session without talking to anyone at a standard gym.  Versus at BBB, where it was easier to make connections with people and foster friendly competition. Discovered I’m quite competitive!’

So what made her want to join a gym like ours? Her story might resonate with a fair few of you… ‘I wasn’t getting the results by myself. There was no accountability. Whereas at BBB, I enjoy the accountability in making progressions in weights and times in WODs each week and the occasional shred programs.’

The high-level accountability, programming, and coaching at Body by Brando has meant that Phoebe has surpassed what she ever imagined she could do before joining; ‘I had never done Olympic lifting before and never thought I would enjoy it. But once you are in the class, the way the class is structured breaking down the movements helped me gain more and more confidence over time.’ This structure and breakdown of the movements turn something that is seemingly complex into digestible chunks, which aid the learning process. Having this system in place means that we can apply it to our classes, and progress members all the way from beginner level to advanced athlete. You basically get a personal training touch, but with a group training mentality and price!

As a result of this, Phoebe’s ever-growing list of achievements includes ‘a PB on my snatch, power clean and deadlift, better freeholds in my handstands, handstand push-ups with one mat, and a new progression on my muscle ups (jumping on top of bar)!’.

So, is Phoebe’s story the kind of stuff you’ve dreamt of? Unlocking physical and mental skills you can only do in your wildest dreams at the moment, being a part of an awesome community of legends, and working on being 1% better each day?

Who knows, in a years’ time there is a high chance you could be like Phoebe and be doing the things you can only wish about at the moment. All you need to do is reach out to us and learn how. 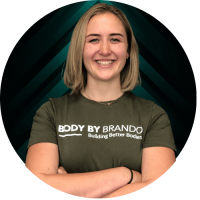