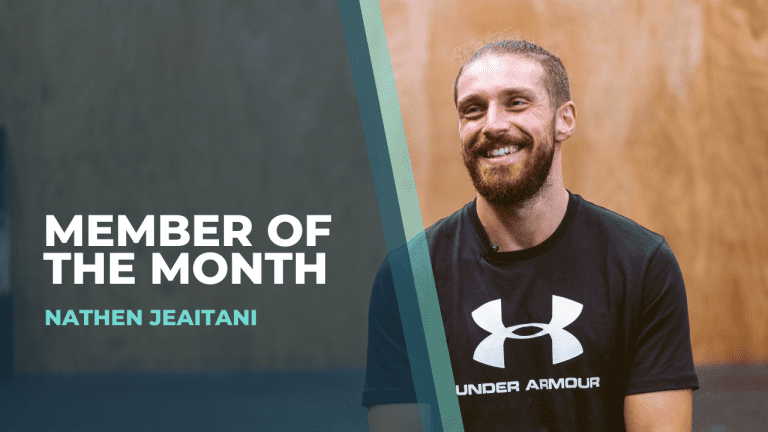 Our latest superstar is none other than the divine ponytail – Mr Nathen Jeaitani. The ponytail has been with us since the end of COVID and has seen some massif (like his chest) results with us.

After using COVID as an opportunity to assess where his training and health were at, Nath quickly realized that the aggressive teal castle of BBB would be the perfect location to fulfil his needs.

After playing footy and having a history of bro splitting, Nath’s previous gym regime provided him with the aesthetics, however, one can only do so many bicep curls before motivation goes down. The new training environment proved challenging for Nath at first, and then he rose like a salmon to become the poster boy for the 6:30 class.

Tell us a bit about yourself! “My name is Nathen, I’m 27 years old and I’m a Finance Broker. Before joining BBB I was relatively fit and healthy as I’ve been active most of my life growing up playing sports and spending a fair bit of time in the gym however after years of unguided training, I feel my body started to fall apart, I wasn’t seeing any results or progress with my training and I was constantly carrying injuries and moved pretty poorly.”

Like most of us, Nath had trained previously at commercial gyms and taken health and fitness very seriously, playing loads of sport growing up as well. However, it cant be all fun and games – as Nath quickly realized that moving up in the corporate world would mean sacrifice, and unfortunately meant that health and fitness had to take a backseat. “As time went on from my days of playing sport as well as life getting in the way e.g. work, that level of fitness started to fade away and I felt myself getting out of shape.”

This isn’t uncommon to hear in our initial sales chat. Young professionals looking for the most bang for buck in the hour per day that they spend with us. We offer structured and varied training that progressively overloads each of the 10 physical skills. Having a broad spectrum of skills to aim for adds massive value for our athletes, and it keeps them wanting more. Being an already driven and motivated athlete, Nath’s constant hunger to improve has yielded great results for the ponytail.

What was your goal when you originally signed up? “When I first signed up, my goals were to drop some body fat, get leaner, and most importantly to get fitter – I wanted to look and feel healthier.”

However it wasn’t all without difficulty – despite his athletic background, Nath initially struggled with some of the more advanced gymnastics skills.

“Before starting, I was most nervous about…. some of the gymnastics movements. I’ve never really been good at gymnastics especially handstands so when I saw that handstands and handstand push-ups were a regular part of the programming I was sweatin’ a little. The first time I attempted them in a class (Brady may remember this), my arms gave way from underneath me and I fell pretty awkwardly on my head. Stubborn me of course had a second attempt (if at first you don’t succeed right?) and fell slightly less awkwardly on my head again. At this stage Brady gave my bruised ego a gentle pat and kindly suggested to ‘leave it there for today Nath’. And he couldn’t be further from that now, smashing out 30+ muscle-ups and 60+ handstand pushups in a single session – is a testament to how hard Nath has worked.

So what was originally holding you back? “The reason I couldn’t achieve this on my own was due to my lack of knowledge about training and allowing my body adequate recovery as well as an unwillingness to add variety into my training (which stemmed from a lack of knowledge).”

Apart from the amazing results – we take pride in our community and the environment we’ve facilitated – “the sense of community is awesome, everyone in the gym is your mate including the coaches so it makes it super enjoyable to be there even on the days you don’t feel like training, you still end up going just to see everyone.”

What are you most proud of achieving since you started? “The thing that I’m most proud of since joining BBB is getting my first bar muscle-ups. They’re a cool-looking movement and I’ve always wanted to be able to do them but never thought I would.”

What else is different about your life since beginning your program? “Since joining BBB my life has had huge changes. Overall my health and wellbeing is great, I’m the fittest, happiest and healthiest I’ve ever been. After doing the 6:30 am classes I’m now a morning person and find myself getting up earlier even on weekends and making the most of my mornings. I’m spending more time getting outdoors and doing physical activities whether that be getting to the beach for a morning/afternoon swim, taking the dog for more adventurous walks, going on weekends away etc. I’ve also found that in other parts of my life I’m more open to trying new things and more motivated to get stuff done.”

What would you say to anyone else who might be thinking about joining? “If you’re on the fence about joining BBB then don’t be, it’ll be the best decision you make for your health and fitness plus you’ll get to be around a really good bunch of people who bring out the best in each other.” 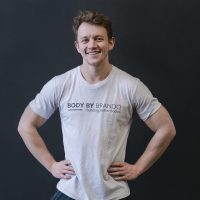