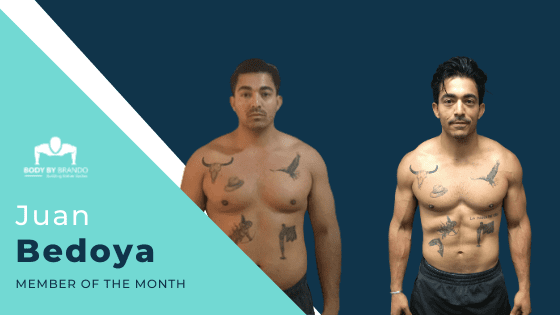 It takes a special person to represent BBB as out member of the month! Luckily for us – there was only Juan man for the job.

When selecting the man-mountain – we were unsure if we would have had to write one or two blogs – possibly Juan for his left bicep, and Juan for his right…alright that’s enough shit jokes for this paragraph.

Juan joined us at an interesting time – we were in the lockdown period and not operating out of our gym. He worked one on one with Dan one on one to set achievable nutrition targets, and safe to say he’s smashed them out of the water! Hes shredded down to an insane 10% body fat percentage..

So straight into business. Tell me a bit about yourself

“I played footy growing up all through high school and when I was growing up so I was always active. I think work got in the way and uni got busy as well, so that sort of stopped me being active, but fitness and being active was a massive part of my life previously and was never really out of the blue for me”

What were you doing in terms of exercise before? And what made you take the initial step?

“Regular gym work and bodybuilding style training (duh) and that was awesome for when I was 25, but as I got older and started to do more at work, training fell by the wayside. I got to a point just before COVID, I was the heaviest I’ve ever been. I then tried to go on a  bit of a diet doing the training I was doing before and I actually gained 4kg. So then I decided that it was probably time to go see somebody that would tell me what to do”

You came to the right place brother. Juan has applied the principles of nutrition and body composition learned in the fundies with great success.

Was there anything that you struggled with?

“Just the language – I was doing the online classes (during lockdown) for a bit before the outside classes. But just the terminology you know – like id be doing the workouts at home and in the middle of each set id be googling what an EMOM is or what an AMRAP is.”

When you look at the mountain of muscle now, It’s hard to picture him being so apprehensive and not knowing what’s happening. Recently he’s upped his game and has started to inspire others in the gym who have been in a similar situation to him. It’s been awesome to see such a big transformation in such a short period of time.

"This is definitely the best I’ve felt in years.” 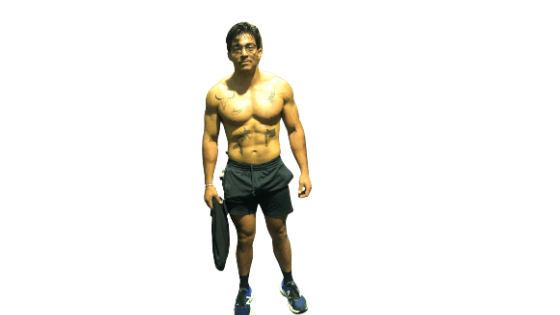 What’s the difference between us and what you’ve done previously?

“Before I started here – I was training on my own so I had really bad back pain, probably carrying around too much weight doesn’t help. So that’s, why I wanted to join because I know you guys are super movement, focused, and sustainability and after the best outcome. The main thing for me was something sustainable, to be healthy and have good movement and to feel good about myself – and this is definitely the best I’ve felt in years.”

A lot of our members share a similar story to Juan, have always trained but sometimes lacked direction and a community to help them really push!

So what were your goals when you started?

“When I started I was 95, the heaviest I’ve ever been in my life and around 25% body fat now I’m sitting at 81 and about 10% body fat.  Wasn’t really sure whether it was gonna happen”

We change people’s perception of what they think is humanly possible, and then help them actually achieve it.

“To get down to about 7% and maintain, and improve my fitness and things like handstands and muscle-ups”

Typically we will see people start out for reasons such as the ones stated above, and sure enough they become addicted to improving their performance, which Juan  definitely has! We asked the big man what he would say to somebody that’s on the fence?

“I was in the same position as them, all I would say is go to somebody who’s actually putting some science behind the work that they’re doing – you won’t regret it. I told Dan that I wanna maintain my social life, I still wanna drink on weekends – it’s not just numbers into a computer and everybody gets the same formula.”

You’re making us blush big man, and this time its not even because of your biceps!

“I’m really appreciative of the way you guys show up as coaches, and the thought process behind that and the systems are really impressive. As much as it is a group program, it’s very much tailored for the individual client. There are so many guys that started around the same time that I did that were struggling to pick up a bar and now they’re doing muscle-ups. The results really speak for themselves!” 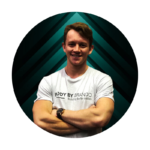 PrevPreviousPortion Sizes: Are you eating the right amount for your goals? The simple strategy to track your food.
NextPaddington Feature Member: Nathan Ive-SmithNext