Congratulations to Jeremy, Paddington’s January and FINAL feature member for the location.

Jeremey moved to Sydney a little over 2 years ago, only really knowing the covid life, he was actually happy to be settling into a great city.

One year after his big move, Jeremey found us. Like so many before him, he had goals to work on his body composition, mainly adding some lean muscle mass. I can only assume to show off to his Canadian mates how good he looks on the beaches of the eastern suburbs.

Now Jeremy looks to push himself to reach his physical potential, whilst also remaining injury-free and looking great. Whether that is flying high doing muscle-ups, or winning a running workout, Jeremy is certainly doing it all.

So far he has achieved “A lot!  Most of the movements were new to me so I’ve developed a lot of technique over the past year (still a lot left to learn though eh?).  I’ve also built a lot of friendships through the gym which I would definitely consider one of my biggest achievements and one of the things that keep me coming back.”

Jeremy was initially hesitant to join because of “Crossfit”, “I had all of these preconceptions about Crossfit (injuries, screaming coaches, competitive workouts, Olympic lifting, etc) and it was just not the environment I was interested in joining.  It wasn’t until I had a chat with a few BBB’ers before joining that I realised it wasn’t actually the case.”

Have you ever felt like you plateaued working out on your own? It’s pretty common and was no different for Jeremy. “Before BBB I had tried solo workouts/programming at Fitness First style gyms.  I had some success with this format but I quickly reached a plateau because I didn’t have the programming to keep myself challenged and entertained.”

We believe having a like-minded community around you all striving for similar goals without judgment is a top priority in keeping you healthy and staying accountable. Jeremy was quick to learn this when asked what made us different.

“As I’ve said I think the biggest thing is the community. It’s always great to rock up and to the gym and train with all of your mates (and most importantly coffee afterward).  It helps keep you accountable as well and makes you show up even when the WOD is a bit frightening”

We have nothing but praise for our January feature member. Keep up the good work legend! 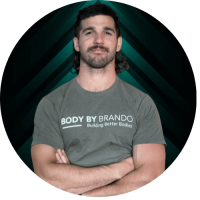