It’s that time of the month again folks, time to learn a little more about one of our members who is breaking ground on their goals and adding value to our community.

Mr June goes to the music man, Andy Procopis. Brisbane born and bred but has been living in Sydney for the last 10 years, Andy has brought good vibes to the 5:30 am crew and some great playlists that all at BBB have sampled while taking class!

Prior to being a morning regular at BBB Paddington Andy partook in a standard exercise routine at his local globo gym. A lack of structure and a team to get behind him saw his motivation drop and his love of training take a back seat, “I wasn’t as motivated as I once was. I was getting bored with the same gym movements and programs day after day. I was definitely longing for something different.”

This lack of motivation and recurring lower back injuries forced him to seek help and respark his love of fitness.  “I figured, as I was entering my late 30s, if I wanted to continue to train, I needed to strip it back and build good foundations and learn how to move well.”

Since joining Andy has improved his overall mobility and his hitting RX weight on his Olympic lifts, something he never thought possible when first joining. I had the pleasure to judge Andy for one of this year’s Crossfit Open workouts and can confidently say the lad has ticker! “Completing the CrossFit Open was a huge achievement for me. To have competed in something organised, with a definitive finish line and to then cross it was a great feeling. At least it was once I got my breath back.”

He’s made the leap to BBB, conquered the elusive Olympic lifts and bulletproofed his lower back. What’s next?  “My bar work is a bit hot and cold so I would love more consistency there. I’ve managed 4 muscle ups before but other days I struggle with my kipping pull ups and chest to bars”.

These accomplishments in such a short period of time are awesome and Andy gives a lot of the credit to the community created around the training environment. ”Just the other day, I saw someone walking around Redfern wearing a BBB hoodie. I figured they went to the Waterloo gym and I said hello and asked about that morning’s WOD. Turns out it was his bf’s hoodie and we laughed about me just being the voice in the chorus telling him to join. Knowing my luck he’ll join and beat me in next year’s Open.”

Never without a smile on his face Andy has improved in leaps and bounds. “It is my favourite hour of the day. Shout out to the 5:30am gang who get in 15 mins before class to bash out a cheeky metcon.” From not being able to maintain an upright torso while front squatting in his Fundamentals to PRing his TEMPO front squat at the end of the latest Functional Hypertrophy block, we are so stoked with the progress he has made (I may be biased after taking his Fundamentals).

Congrats on the MOTM mate! We can’t wait to see what’s next in your athletic development. 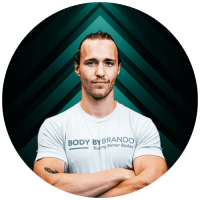