Getting lean, building muscle and smashing muscle-Ups: Meet our member of the month

From humble beginnings and in only a few short months, Brock has swiftly gained “Big Dog” status amongst his fellow Waterloo athletes. Up until 6 months ago, Master Bates had only been exposed to the standard commercial gym and admitted that this style of training was quite foreign for him (as it is with most things you haven’t tried before).

The movements were new and the skills seemed unattainable, however, after being diligent with his training and spending 5-10 (or 50) minutes after each session to work on skills, his efforts have paid dividends.
(It could also be that he continues to show face at Marek’s brutal 6 AM Saturday sessions, despite the fact that this would be considered abuse in more states than not).

So how did this magnificent journey begin?
I asked Brock what the steps were for him to come into the nurturing arms of BBB?

“For me to take the leap of faith, I was training at a conventional gym and I walked past the gym and I saw Brady and something drew me in and I had to go talk to him…”
It truly was love at first sight, and he hasn’t looked back since.
(I didn’t even have to pay him for that one).

We know that its hard for people to take the first step so wanted to know if there was any apprehension before starting.

“I was probably most worried about the stigma around CrossFit and injuring myself, but it was after the first fundamentals session I realised that there was nothing to worry about. There’s always a coach around to show you what to do and make sure you’re comfortable with all the movements.” 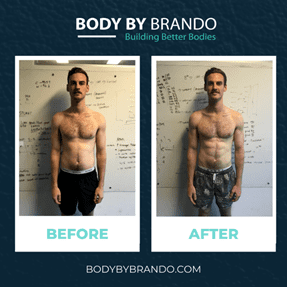 “For me to take the leap of faith, I was training at a conventional gym and I walked past the gym and I saw Brady and something drew me in and I had to go talk to him…”

Most of our clients come to us with two main goals:

Brock was no exception.

“When I first started my goals were to get fitter, get more muscular and to get a muscle-up.”

So far, I’ve lost a lot of body fat and gained a bit of muscle; I look a lot more muscular.
In terms of performance a lot of these lifts and movements I’d never really done before I joined BodyByBrando, so overall I’m just getting a lot better at the movements in general.
I even got my first muscle-up, which I’ve been trying to do for my whole life.. so things have really improved.”

Ahhh , Music to our ears.

“I trained at a conventional gym before this where you had to try and motivate yourself to do the workouts. Here, you have guidance every session, the workouts are set for you, and you can come and do your work.” 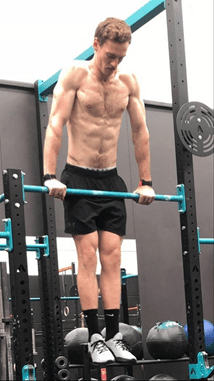 One of our favourite things about Brock is that he’s always hungry for more.
He’s never satisfied with where he’s at and will do whatever it takes to make it happen.
Before I could respond he chimed in with his goals for the future.

“At the moment I’m really trying hard to improve upon the things I’m not good at, like handstand push-ups, overhead strength, the Olympic lifts…basically everything in CrossFit (haha)… the goal is to try and complete all the workouts in the open in October.”

However, it isn’t all muscle-ups and burpee box-jump-backflips. Moving to Sydney, after residing in the city of churches (Campbelltown) and getting straight into the grind of real estate, it’s been tough finding a community to socialise with. So the social aspect has a massive role to play. You feel like you’re part of the community. I’ve made so many friends here, people that push you. It’s just a cool environment.

I trained at a conventional gym before this where you had to try and motivate yourself to do the workouts. Here, you have guidance every session, the workouts are set for you, and you can come and do your work.”

No matter what skill level you’re at there’s a scaled version of every workout and you see progress really quickly. It’s kind of addicting – it’s just a good place to train.”

From our point of view, it’s been awesome to see how Brock has grown as an athlete and a figure in our community, he is a pivotal part of the 5:30 am crew.

I’m super keen to see how he goes with the open later this year.

PrevPreviousThe perfect time to practise discipline
NextHow Rohan went from chronic neck and shoulder pain to becoming our February member of the month.Next