Well, it wouldn’t be the month of April, without having this gentleman, to be our knight in shining armor for it! With truly great pleasure, I would like you all to take a read and get to know our MOTM for April….Travis Bell!

A little more to Travis, is that he isn’t just one of our amazing members at BBB for now 2 whole years, Travis is working hard in digital customer engagement at Twilio! Now before Travis was at BBB, he was training at just your average Globo gym doing typical strength work.

As a kid growing up in the country Victoria, Travis was right into all things country. Cows and motorbikes, you get the drill. But finding gymnastics, it kept him out of trouble! I mean trouble? Travis? No way! Haha

The reason Trav reached out to BodyByBrando was that Sydney was coming out of its first COVID lockdown, and having to work out by himself every day. He wanted to try something new, be a part of something, a community, surrounded by like-minded people. Travis already had a few mates training at BBB and were loving it, in fact, it was all they talked about in social settings. Ultimately leading to Trav joining all his mates here with us at BBB! He has not looked back!

Travis joined with the intent to accomplish a few goals. His goals were to try something new, to learn to move differently and to shred but not lose his muscle mass. To be honest, Trav was quite nervous to lose the muscle mass he had worked so hard to gain. He even, when beginning at BBB, kept his Globo gym membership to push weights thinking the two would be needed to maintain it all, considering the “cardio” that he would be doing in classes. None of that was even a problem, as he now looks back on 2 years at BBB. In his own words “I don’t feel I have looked, felt and moved better than I do now”

Now, what makes BBB different from every other gym out there? Well, Travis believes it is the coaches and the community. Training at 5:30am, he believes is the hardest and best part of his day and that is the work that all the coaches put everyone through and the awesome people that Trav is able to train with each day.

What is Trav most proud of since joining BBB? Nailing his butterfly pullups and muscle-ups, whilst also making them pretty, as he mentions Harry would say.

Travis has really found that his life has been different since beginning his time and program with us at BBB by his friends. He wanted to be a part of the community, which as said above, is why he joined in the first place! He honestly did not expect from this community to have built and gained the friendships that he has!

What would Trav say to anyone else like him who once wondered about signing up to BBB? Trav says that if you would like to move and if you want to be a part of a community that celebrates one another every day don’t think anymore…Come join us!

Thank you, Trav! We again, all coaches and staff of BBB couldn’t be happier to have you as our April MOTM! Bring on all the years and more to come with you and all that there is to achieve! 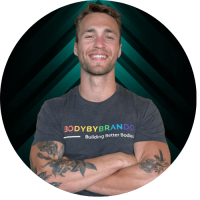